Infrastructure of the Portuguese Node

GBIF Portugal has implemented and maintains the IT infrastructure necessary to ensure the participation of Portuguese institutions in the GBIF. This infrastructure is fully interconnected with GBIF's global network and with the PORBIOTA National Research Infrastructure. The implemented services, based on open source computer tools, ensure the following workflow:

The Portuguese Node supports institutions in activities such as cataloguing and digitising of biological collections:

Specify 6 is an open-source tool for cataloging and management of collections supported by the Specify Collections Consortium. This Consortium was created in 2018 and produced a series of Specify Projects that were financed by the U.S. NSF and led by the University of Kansas, for 21 years. The Portuguese Node has been collaborating with the Specify Project, by providing software translation and by building capacity nationally.

GBIF Portugal ensures 100 TB of storage space for biological collections image backup. This resource results from investments in equipment by the PORBIOTA infrastructure. The equipment will be integrated to the computing infrastructure of the INCD (National Distributed Computing Infrastructure).

The support infrastructure for biodiversity data publication is based on the open source tool Integrated Publishing Toolkit (IPT). The software was developed and is supported by the GBIF International Governing Board.

The Portuguese Node maintains the installation http://ipt.gbif.pt, which is used by national institutions for publishing their datasets. This installation is credited by GBIF as a Data Hosting Centre, accomplishing a set of requirements for services, platform administration, data security and support. The service is based under the Instituto Superior de Agronomia infrastructure.

It is also registered on the resource FAIRsharing.org, that documents data and metadata standards, and its interrelations with databases and data policies.

The Portuguese Node enables the use of this infrastructure to all national institutions that publish their data trhough GBIF, and also to publishing institutions from the CPLP community. This last was defined through an Agreement of Services.

This component is related to the agregation of data from published datasets, including quality controle and formatting routines. It also associates metadata, institutional information, among others. This component is secured by the governing board of GBIF.

The Portuguese Node of GBIF implemented and maintains the Biodiversity Data Portal of Portugal, where is possible to access biodiversity occurrence data published by national institutions through GBIF, and data published by foreign institutions for the Portuguese territory. This portal corresponds to the implementation of the national platform of the Atlas of Living Australia, developed by the research infrastructure under the same name, which is also the Australian Node. The platform is currently supported by the community Living Atlases, a community of GBIF Nodes and other partners, and that the Portuguese Node is part of.

The implementation of the platform seeks to answer to access needs for biodiversity data, with functionalities such as visualisation and data analysis adjusted to Portugal, and its geographic, administrative, biogeographic and ecological context. Moreover, it provides tools for data analysis with greater details and capacity for details. With that, the user can verify immediately the availability and adequacy of data, without the need of downloading it to locally analyse it.

Data available in this portal for consulting, analysis and download will be, whenever possible, the same as the ones at GBIF.org. Differences that may exist will result from two factors:

Data are, for this reason, obtained by the portal GBIF.org and therefore, only data published globally are available at the national portal.

The portal implements several modules of the Atlas of Living Australia, and its data source is available at: https://github.com/AtlasOfLivingAustralia. Necessary adaptations are available at the GBIF Portugal repository https://github.com/GBIFPortugal. Our website was implemented under the cloud computing of the INCD, www.incd.pt, in cooperation with PORBIOTA and has the following architecture:

The implementation of the portal is supported by a set of virtual servers created under the clouds OpenStack manager.

At this moment, the portal has the following modules from the Living Atlases:

And the architecture is as shown below: 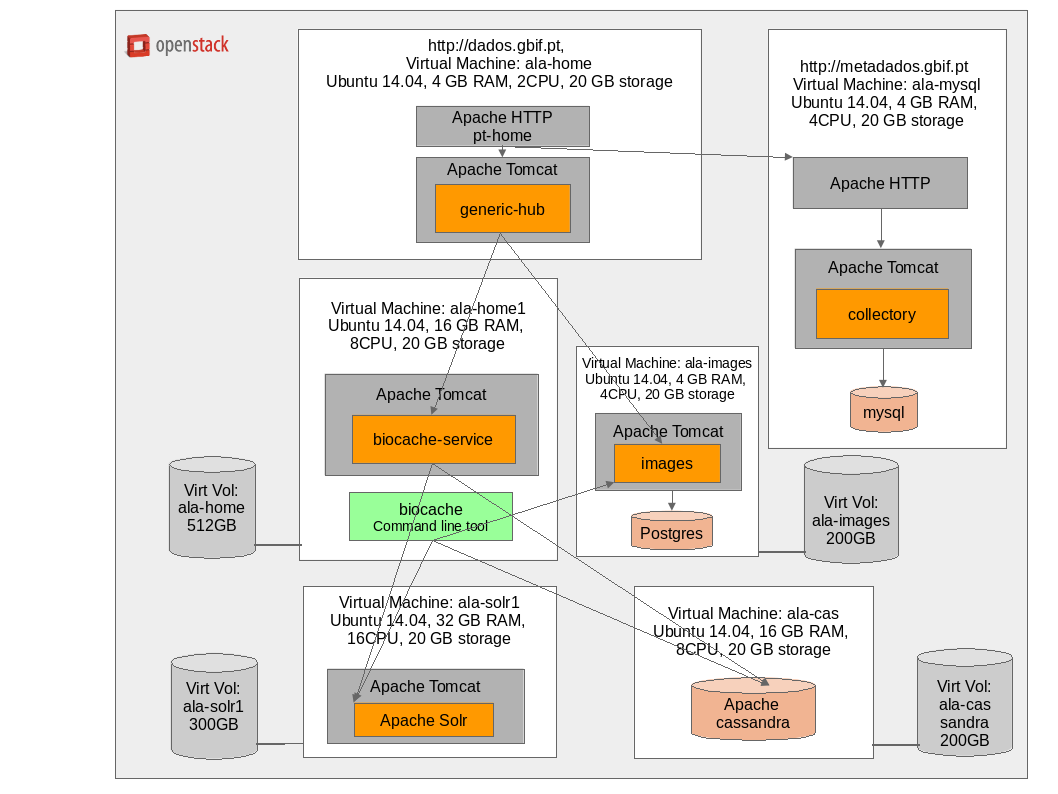 The institutional and communication portal from the Portuguese Node of GBIF, www.gbif.pt, serves as a provider of data and of information to the national community regarding activities, information and news from the global network of GBIF; also cooperation activities and projects. It also advertises several tools, manuals and other resources for Biodiversity Informatics, including GBIF materials. The website is implemented in a open source platform, namely Drupal, and uses the data manager DBMS MySQL. The portal is supported by the IT team from the Instituto Superior de Agronomia.