The first Historical Collection of Brazilian flora is available in GBIF 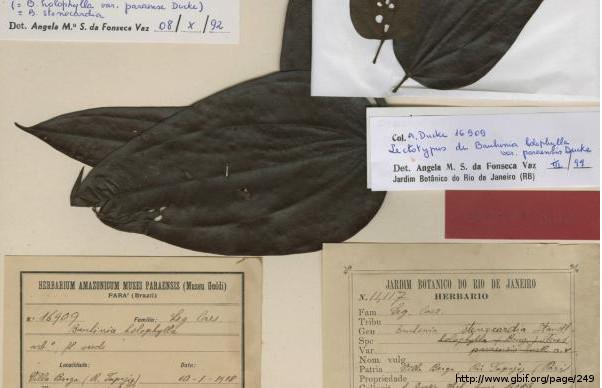 The Rio de Janeiro Botanical Garden made available on GIBF over half a million data from one of the largest historical collections of brasilien and South American flora. The dataset represent the digitization of thousands of herbarium sheets collected by some of the most important naturalists of the XIX and XX century.

The largest collection of plants belonging to Brazilian emperor D. Pedro II (XIX century), became the first dataset supplied by Brazil for publication at GBIF since joining the group last year. Over half a million individual data were provided by the herbarium of the Botanical Garden of Rio de Janeiro (JBRJ).

This dataset is focused on the Brazilian and South American flora and comes from a unique collection of over 25,000 specimens, including the herbarium of the French botanist Antoine Laurent Appollinaire Fee Collection Adolpho Ducke, Johan Löfgren, João Geraldo Kuhlmann, Paul Campos Porto and Alexander Curt Brade.


The records in the GBIF dataset are digitized from thousands of herbarium sheets, containing information on their labels such as the species name, location, date of collection and collector name.

The Research Institute of the Botanical Garden, which manages the collection, became the first Brazilian data provider in GBIF. These data were provided by the Brazilian Biodiversity Information System (SiBBr), which acts as the national node of GBIF and is establishing a network of institutions whose data will be accessible both in GIBF as the national portal for biodiversity. The SiBBr is a project implemented by the Ministry of Science, Technology and Innovation (MCTI), with technical support from the United Nations Environmental Programme (UNEP) and funded by the Global Environment Facility (GEF).

The Executive Secretary of GBIF, Donald Hobern welcomed the publication of the Rio herbarium dataset, saying: " It is very exciting to see this great collection being made accessible to the global community through GBIF. This is an important milestone as the first of many Brazilian datasets to be published through our network, enabling researchers throughout the world to understand more about the huge diversity of nature in Brazil – and the means to conserve it."

Rafaela Forzza, curator of Botanic Garden herbarium said: "The availability of this large dataset from our collection will contribute mainly to studies on taxonomy, biogeography, and diversity of neotropical plants by scientists worldwide. "

The scientific director of the institution also states that: " It is important that other Brazilian and Latin American institutions make their data also available through GBIF, allowing a more precise analysis of the geographical distribution of native species. "

The general coordinator of ecosystem management of MCTI , Andrea Portela added: " Once the SiBBr is fully implemented, we expect many other research centres to receive an extra incentive to share their data and cooperate on the construction of public policies for conservation and the sustainable use of Brazil’s biodiversity."