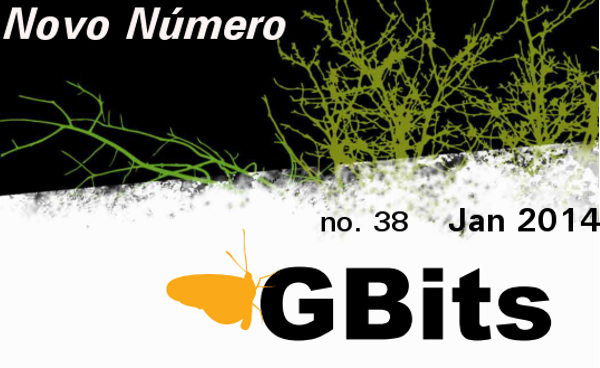 The new GBits number (No. 38, January 2014), which is published every two months, is available, aiming to promote the activities of GBIF. In this edition, highlights are the published paper from USA “How plants weather the cold” where GBIF data are used, the data published by Cheadle Center for Biodiversity and Ecological Restoration (USA), National Museum of Nature and Science (Japão), Museu de História Natural do Porto (Portugal) and “Taxa Watermanagement the Netherlands” list (Netherlands). It is also referred the large scale digitization underway in the Netherlands and Sweden, the new portal of the Dutch GBIF node, publication of date papers by Columbia and the mentoring meeting between France-Portugal-Spain in January and training plans between the Spanish and Irish GBIF nodes.

In this edition, highlights are the publication by Nature magazine of a study has used data from over 30,000 species available for hundreds of institutions through GBIF, aiming to cast new light on how plants colonized colder regions. The study assembled she largest evolutionary “timetree” to show the order in which flowering plants evolved strategies such as the shedding of leaves to move into areas with cold winters.

This number highlighted also the data publications by several institutions like the Cheadle Center for Biodiversity and Ecological Restoration (USA), with 24,000 records, the National Museum of Nature and Science (Japan) with 30900 records, the Museu de História Natural do Porto (Portugal) with 880 records and the “Taxa watermanagement the Netherlands" list (Netherlands) with 16,000 species.

The different partners have large-scale digitization projects. The Dutch National Museum of History, Naturalis, has reached the halfway to digitize 7 million objects, some of these are already available in the GBIF portal. At Sweden several institutions are planning an ambitious project of collections digitizing (about 33 million specimens). This GBits number also highlighted launch of the new website of the Netherlands node of GBIF, which will serve to deliver news, projects, training and tools.

The Colombian Biota published by the Humboldt Institute was the first Latin American journal to publish biodiversity data papers, in a total of six publications (in GBits you can find the list of publications). The Irish node of GBIF has produced a series of information sheets on invasive species and announced his training plan for 2014.

The new number of GBits also highlights the first of three mentoring project meetings GBIF between Spain, France and Portugal on January at the Royal Botanical Garden of Madrid. This meeting aimed to exchange experiences and specialization among different nodes on the subject of e-learning and data quality. The next meeting of the mentoring project will be held in Lisbon, April 28-30.

The Spanish node of GBIF also presented its training plan for 2014.
The new number of GBits is available here.