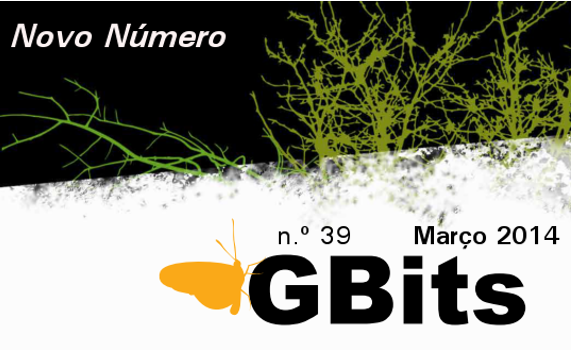 The new GBits number (No. 39, March 2014), which is published every two months, is available, aiming to promote the activities of GBIF. In this edition, highlights the new features introduced in GBIF Portal, the first data paper from Portugal and the datasets publications by several institutions like the GBIF Benin, Czech Republic, Netherlands and others. This edition is also referred to the European project OpenUP! that became available more than 1.6 million data objects of natural history in Europeana based on BioCASE and GBIF tools. Are also highlighted in this edition employment opportunities in the GBIF Secretariat as well as the applications for the 2014 awards Ebbe Nielsen and Young Researchers 2014.

It was released earlier this month a new version of the GBIF portal where occurrence records accessible through GBIF portal now present richer information, where users can access many more fields of information in the detailed occurrence record pages. This was possible thanks to new technologies recently adopted by GBIF, allowing use of multiple servers.

This edition, highlights the real-time data publication from taxonomic research with a description of a new spider species in Biodiversity Date Journal, as well the publication of the first data paper based on a Portuguese biological collection, the article by Miguel Monteiro and co-authors describes the Bird Collection of Angola hosted at The Intituto de Investigação Científica Tropical, the article entitled The collection and database of Birds of Angola hosted at IICT (Instituto de Investigação Científica Tropical), Lisboa, Portugal, was published by the open access journal Zookeys and is available at http://dx.doi.org/10.3897/zookeys.387.6412.

The new number of GBits also highlights the publications of biodiversity datasets on GBIF portal by different partners such as GBIF Benin with data collection of a census of the country's plants, Czech Republic who published the first dataset from the National Museum of Prague collections, Netherlands with data from an urban fish monitoring project, Spain with seedbank of Botanical Garden of Barcelona, France, Colombia, Germany, United States of America and Canada.

This edition also referred the European project OpenUP! has mobilized and made available at Europeana, over 1.6 million multimedia objects relating to natural history in the three years of project, based on BioCASE and GBIF tools.

This edition, highlights the employment opportunities in the GBIF Secretariat as well as the applications for the awards Ebbe Nielsen and Young Researchers 2014, whose applications ends on April 30.

The new number of GBits is available here.