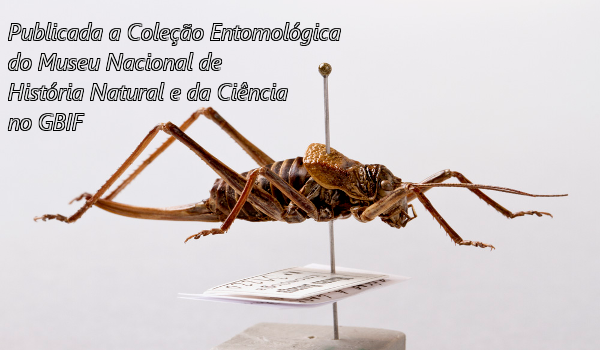 The National Museum of Natural History and Science (MUHNAC), of the University of Lisbon, Portugal has recently published their Insect collection with over 30535 occurrences in a total of 64000 specimens. The data are available at IPT service of the MUHNAC and through the international GBIF portal.

The recovery of the entomological collection was started in the 1980s, after the fire, and currently is composed mainly by donations from other institutions and private collectors. The most important is the Mendonça collection, comprising over 14000 specimens, allowing enhancing the representation of the Portuguese entomofauna. From 1997 to 2003, several campaigns through the Portuguese territory were undertaken by the museum to increase the collection and its representation (ca. 11000 occurrences).

The entomological collection of MUHNAC remains in constant growth, with an increase of about 6% in 2013, and as a substantial number of specimens are still on the process of preparation and cataloguing. In the last years the catalogue has been under digitization, data review, enrichment and validation. It is now completely digitized over 90% occurrences (more than 30 000 occurrences that are the dataset now published), which have been validated, of which about 8000 are georeferenced.

The MUHNAC was the first Portuguese institution to publish biodiversity data through GBIF by its own service data provider. In 2007, it published two databases of its bryophyte and lichen collections. The institution also participated in the GBIF mentoring project Spain-Portugal, which aimed to the implementation of the GBIF Portuguese Node.

Portugal is a participant in GBIF since its creation in 2001. The aim of GBIF is to facilitate the free and open access to biodiversity data through the internet. Currently, GBIF shares more than 750 thousand records for Portugal, published by Portuguese and foreign institutions. Simultaneously, the Portuguese institutions publish biodiversity data for a total of 65 countries, in a total of 86475 occurrences, with emphasis on the CPLP countries. The representation of Portugal in GBIF is made through the National Node which is hosted at the Instituto de Investigação Científica Tropical with the support of the Fundação para a Ciência e a Tecnologia.