Checklist of the Vascular Plants of Portugal from The Lusitanian Association of Phytosociology, through GBIF 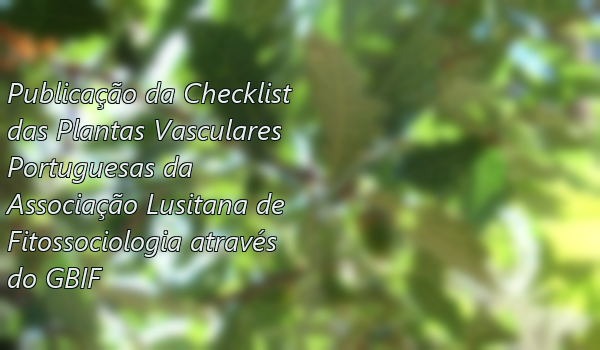 The GBIF node has just published through its IPT service the Checklist of Portuguese Flora with information about 3994 taxa, including establishmet means and emdemins status. Data are available through the IPT service of the Portuguese Node of GBIF and through the international GBIF portal.

The Portuguese Checklist of Vascular Plants that covers Mainland Portugal, Azores and Madeira, and was published in 2012 by ALFA (Lusitanian of Phytosociology Association). The checklist was officially adopted by the Institute of Conservation of  Nature and Forests as the authority file for Portugal, as announced in the official journal DR nº. 142/2008 of 24 July. It includes a total of 3995 taxa (including infraspecific taxa), of which 3314 are for Mainland Portugal, 1006 for Azores and 1233 for Madeira. These taxa are distributed among 185 families and 1066 genera.

The publication of the checklist in GBIF coincides with the publication of Checklist of Bryophytes of Portugal by MUHNAC. These datasets are important for providing authority files for the portuguese biodiversity, which are required for data quality control of datasets published through GBIF.