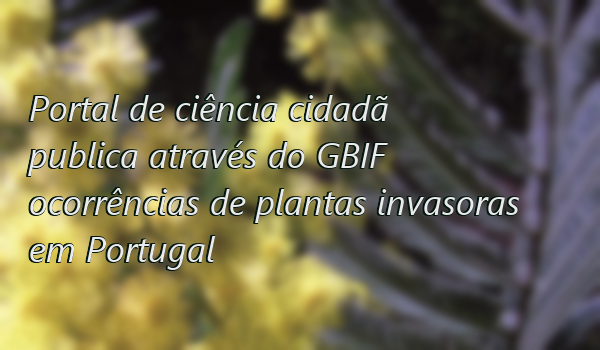 A new dataset was recently published through GBIF by the Centre for Functional Ecology, based at the Universidade de Coimbra, with occurrences observations data for invasive plants in Portugal. The recordset is based on the Citizen Science project and portal www.invasoras.pt which includes a Citizen Science Platform. This dataset includes, at the moment, 4024 occurrences of invasive plants in Portugal, including Madeira and Azores. Data are available through the GBIF IPT service of the Portuguese Node and international GBIF data portal.

The Invasoras portal includes a service mapping observations of invasive plants of Portugal for 43 invasive species. This platform was developed by the project "Invasive plants: A threat from outside" (Media Science No. 16905), developed by researchers at the Centre for Functional Ecology at the Universidade de Coimbra and the Escola Superior de Agrária do Instituto Politécnico de Coimbra. The observations were made by registered users directly on the website or using the mobile application for Android devices.

These observations are further validated through the photographs submitted with the comments, and then are available in the database and the online map.