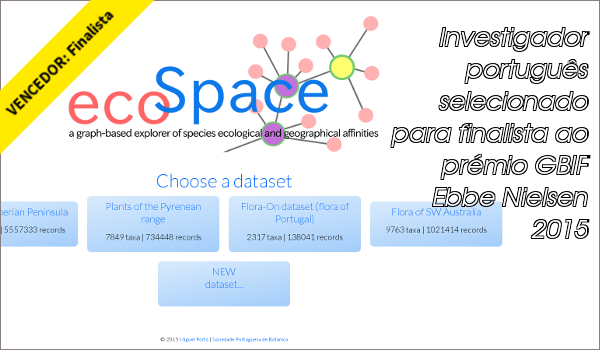 The portuguese researcher Miguel Porto is one of the six finalists selected for the second phase of the Challenge GBIF Ebbe Nielsen 2015, becoming a candidate to win a first place prize pool of € 20,000. The second place will be awarded a prize of € 5,000, and the six finalists selected by the jury, among the 23 proposals submitted, have been awarded with a prize of € 1,000. The final results will be presented at the 22nd GBIF Governing Board, in October 2015, to be held in Madagascar.

The project presented by Miguel Porto, entitled ecoSpace , develops a new form of species occurrence data visualization. This web application allows by dynamic mode, to navigate through the connections between species, in a network established on the basis of ecological and biogeographic affinities between species determined from bioclimatic variables. The network nodes, representing species, can be selected successively, therefore individualizing the affinities with other species, or the user can add new species as network nodes, and verify that the relations established with the species already present in the graph. The selection of each node is always accompanied by the representation density map of occurrences of the respective species. The application can be used using data in Darwin Core format downloaded from the GBIF data portal, or with data from the Flora-on , which dataset is set to be published soon by the Portuguese Society of Botany through GBIF.

“My biggest hope for the Challenge was that the biodiversity community would respond with innovative—even unexpected—entries,” said Roderic Page, the President of the GBIF Science Committee. “My expectations have been exceeded", he concluded.

The GBIF Ebbe Nielsen Challenge replaces the usual Ebbe Nielsen prize, awarded until 2014, which was already won in 2013 by another Portuguese researcher, Miguel Bastos Araújo (see news). This challenge aims to inspire computer scientists, data modelers, cartographers and other specialists to innovate and create new applications in the area of free access to biodiversity data. The finalists will now be invited to improve their submissions to be evaluated in a second phase to select the first and second prizes.