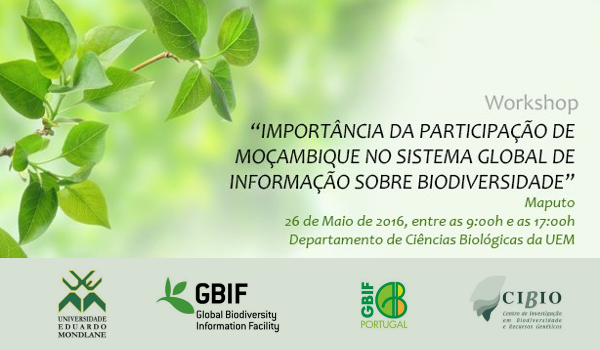 On May 26 it will take place in the Universidade Eduardo Mondlane (UEM), in Maputo, the workshop “Importância da Participaçâo de Moçambique no Sistema Global de Informaçâo Sobre Biodiversidade (GBIF)” (Importance of the Participation of Mozambique in the Global Biodiversity Information Facility (GBIF), co-organised by the UEM and The Portuguese Node of GBIF. The venue of the workshop is the Department of biological Sciences of the Faculty of Sciences of UEM, and is also supported by GBIF and the research centre CiBIO/InBio. This event is framed by the GBIF capacitation project GBIF PALOP, de«veloped by GBIF Portugal with the support of GBIF.

The full day workshop, which was already announced by the mozambican press, has the following goals:

The workshop will involve the Deputy Director from the GBIF Secretariat, Tim Hirsch. The meeting is intended for members of Mozambican and international institutions that have relevant work on biodiversity developed in Mozambique. It is expected that the institutions can, through short presentations, refer to the state of the art of biodiversity information of biological collections, projects or databases of biodiversity occurrence data curated by them.

The Portuguese Node of GBIF is developing the project GBIF PALOP - Promote GBIF in the African Portuguese speaking countries through documentation and seminars. This project aims to increase the capacity of Portuguese-speaking countries about GBIF and the use of biodiversity information through the production of manuals and documents in Portuguese, translated from English versions available on the GBIF portal. Under the project are also conducted workshops about GBIF in the capitals of three African Portuguese-speaking countries, the first one already took place in Luanda in September 2015 and the last one will be held in Bissau, on a date to be determined.

For more information about the workshop in Maputo, see additional details at the UEM website.