Call for proposals to the GBIF 2016 Young Researchers Award 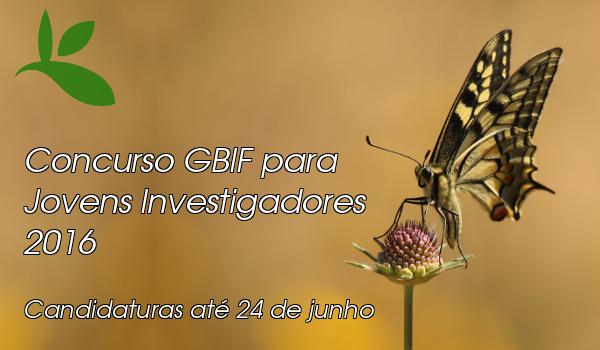 Is it open the call for nominations for the GBIF Young Researchers Awards 2016, which will highlight innovative research on Biodiversity Informatics, developed by students in master's or doctoral studies. In this international call it is expected the submission of projects that demonstrate the critital role of biodiversity information published through GBIF in the development of the master or doctoral projects. Two prizes will be awarded with a money prize of 4 000€ each, one for a master's student and one to a doctoral student.

The applications must satisfy the requirements and detailed guidance in the call for projects. The deadline for submission of applications is 24 June 2016. Applications must be submitted in English and sent by email to node@gbif.pt. The two applications selected at national level will be later submitted to by the national GBIF Head of Delegation by 15 july 2015.

Application submission: by email to node@gbif.pt

Documents to be submitted in the application (see detailed information here):