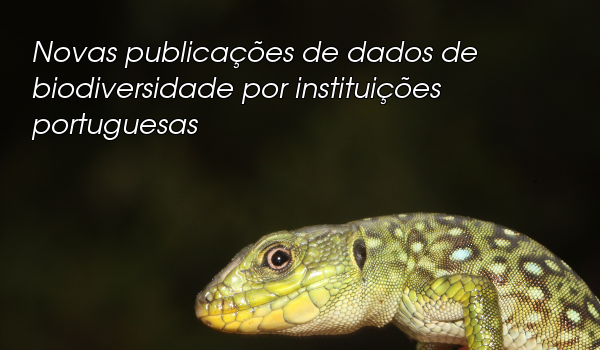 In the last two months there was the publication and updating of three sets of records by national institutions, whose data are already available through GBIF.

Since April this year, the Amphibian Collection of MNHNC of the University of Lisbon is published, corresponding to 993 records for a total of about 3500 specimens, mostly from Portugal, but including records originating from a total of 15 countries, including Sao Tome and Principe, United States, Argentina, Spain, Italy and Mozambique, among others. The vast majority of records is determined at the species level.

In June, it was the turn of the Centre of Functional Ecology of the University of Coimbra to perform an update of the set of observation data of invasive plants in Portugal, based on the portal of citizen science invasoras.pt. With this update, the number of records doubled in this dataset, first published in 2015 with about 4000 records, now reaching about 9500 data, almost all georeferenced. This data set refers to about 40 species of invasive plants in Portugal, including the archipelagos of Madeira and the Azores.

Since Wednesday this week, it was published a set of plant records of Guinea-Bissau, based on observation data obtained as part of a PhD project on the flora of the country. This is the first set of data published by CE3C - Centre for Ecology, Evolution and Environmental Change, which is the most recent institution registered as portuguese publisher. The dataset includes 4059 records, of which 3993 are georeferenced, which account for more than 600 species of plants registered in the country. The data have a broad geographical coverage in the country, corresponding to a total of 232 different locations distributed across all sectors of the territory.

The twelve GBIF publisher Portuguese institutions currently provide more than 430,000 records through 16 datasets, of which 325,000 from Portugal, and the other from a total of 93 countries or territories. The top list of countries in number of records is headed by the African Portuguese-speaking countries such as Angola (62298), Mozambique (24347), Guinea-Bissau (8488), Cape Verde (3468) and Sao Tome and Principe (2371). Only after these, countries of another continent appear, such as the United States (315) and China (311). On the other hand, the total number of records currently published through GBIF for the Portuguese territory is over 1.5 million records, to which contribute the approximately 1.1 million records published by 35 countries. These figures are, however, likely to become quickly outdated, as the number of publishing institutions and provided datasets increases.