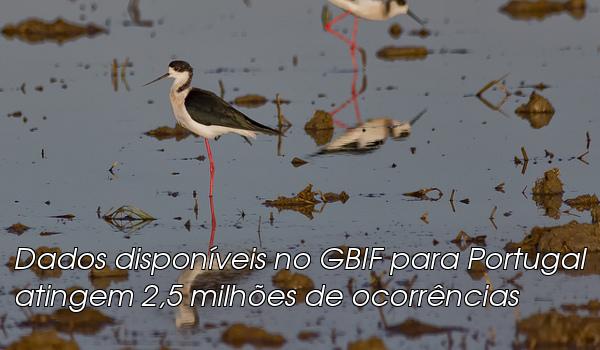 The number of records published through GBIF for Portugal reached 2.5 million data. Most of the data correspond to animal occurrences (72%), with plants being the second kingdom with the highest number of occurrences (20%) and protozoa the third (4%). Of the animals, the vast majority of records are birds (92%). About 86% of the data correspond to observations, of which 2% were based on observations by machines. Records based on specimens preserved in biological collections represent close to 11% of the total.

The sharp increase in records for Portugal was mainly due to the recent update of data published by the eBird dataset, which added more than 1 million records to the approximately 500 hundred thousand that it published for Portugal in the beginning of 2016. Portugal was the country with the highest annual percentage (168%) of GBIF data published by eBird, representing the 8th most-recorded country in this dataset, which now accounts for 275 million GBIF records.

The Biodiversity Data Portal of Portugal has recently been updated with the most update version of the data available on the GBIF international portal, allowing the search and detailed analysis of all information available to Portugal on 30 December 2016.