Call for proposals to the GBIF Young Researchers Award 2017 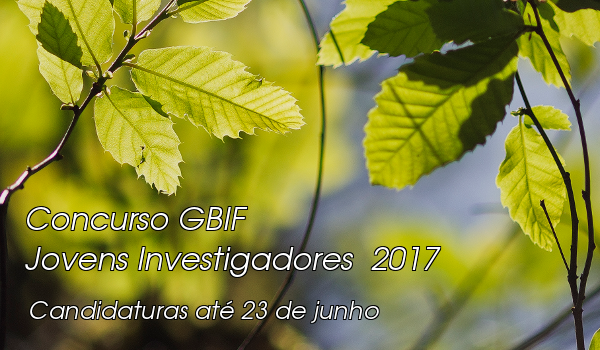 The call is now open for the submission of applications to the 2017 Young Researchers Awards, by post-graduation students, which may win one of the two available prizes of 5000 €, one for a master's student, and another for a PhD student.

The prize will recognize the efforts made by master's students or PhD students on sharing data from ecological studies that they are developing, which need to be organised and arranged as sample-event datasets. Candidates should set up a dataset to be published that documents the abundance or frequency of species in multiple dates or sites. The sample-event dataset should be published though GBIF in order to be eligible to be included in the application. Also the metadata should be published, and both data and metadata will evaluated in the assessment of the application. Metadata are the description of the data, and those ensure that data users are fully knowledgeable of the content of the data, as well as they facilitates the data citation by the users.

The dataset publication should be done through the institution under which scope the dataset was created. The Portuguese Node of GBIF and the GBIF International Secretariat will help in supporting the registration process of institutions as GBIF publisher, as well as in the set up and formatting of data as sample-event dataset. Also the publishing infrastructure of the node will be available for hosting applicants' datasets.

Prize winners will have also the opportunity to publish data paper without processing costs on the open access journal Biodiversity Data Journal, edited by Pensoft Publishers.

Application should fulfill requirements detailed at the call for proposals. The deadline for submission of proposals is 23 June 2017, for the national selection. Proposals should be prepared in english, and sent by email to node@gbif.pt. The two applications selected at the national level will afterwards be submitted to GBIF by the national Head of Delegation up to 15 july 2017. It will not be possible to submit proposals directly to the International Secretariat of GBIF. GBIF will announce the award winners in September 2017.

Proposal submission: by email to node@gbif.pt

Documents required to be included in the proposal (check details here):

1) Summary of Research Project (200 words) – short description of the goals of the research activity associated with the dataset.

2) Dataset URL – location from which the review panel can access the dataset, which should include complete metadata describing the data, and be structured as a valid
sampling-event dataset.

3) Curriculum vitae of the student applicant including full contact information at the home institution.

a) An official letter from the student’s faculty mentor/supervisor certifying that the applicant is a student in good standing in the graduate programme of the university.

b) At least one, and no more than three, letters of support from established researchers active in a field that encompasses and incorporates biodiversity informatics (e.g., genetics, species composition and traits, biogeography, ecology, systematics, etc.), see more at http://en.wikipedia.org/wiki/Biodiversity_informatics.