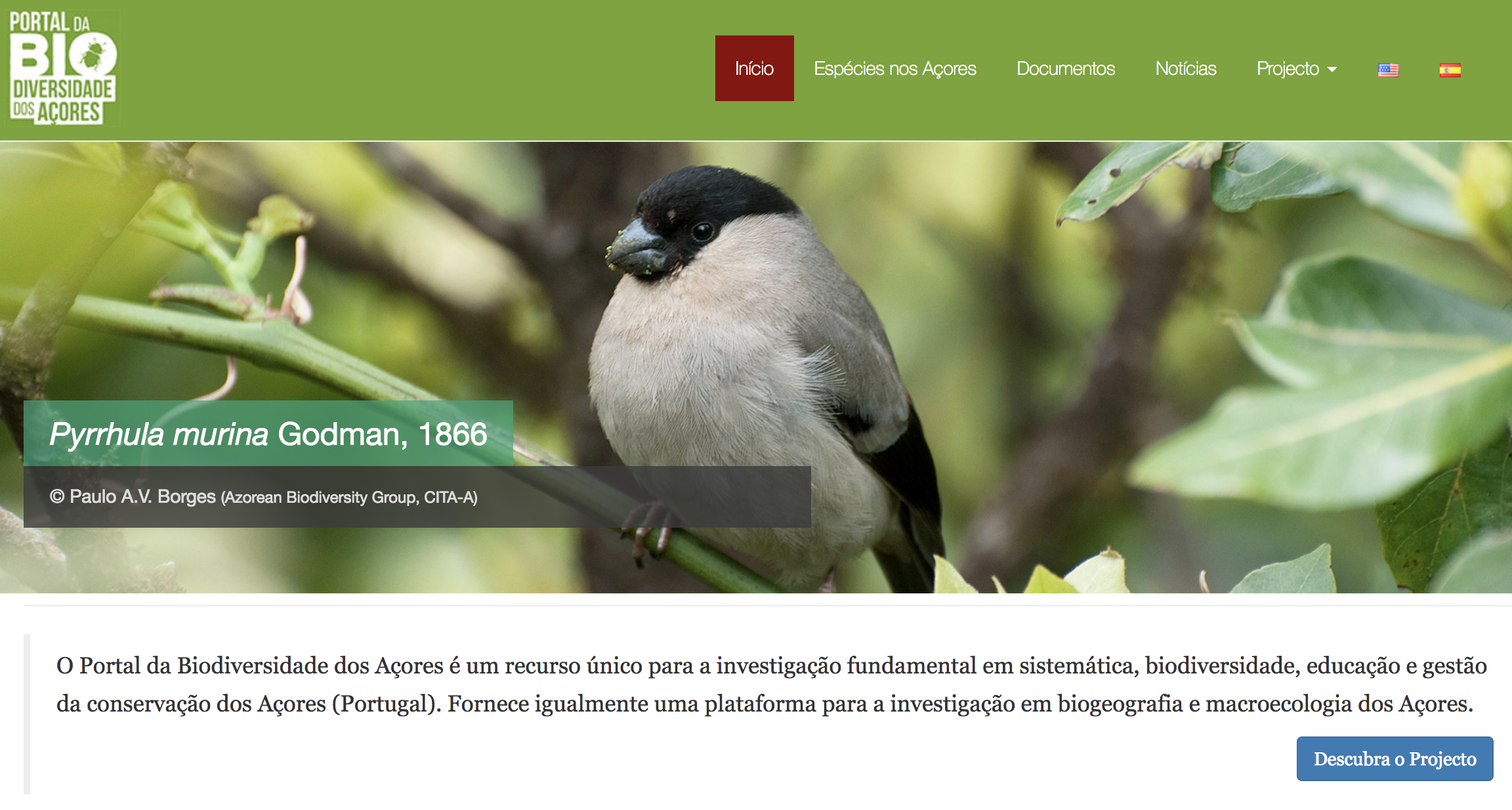 Publication through the GBIF of 2.4 million biodiversity records by the Azorean Biodiversity Portal makes the region one of the most data dense areas worldwide.

The University of the Azores (Azorean Biodiversity Group / CE3C) published through the GBIF about two and a half million records of species occurrences, making it one of the regions in the world with the highest number of biodiversity records per area, with ca. 1000 records per square kilometer. The data can be accessed through the GBIF international portal and soon, through the GBIF Portuguese Node data portal. It includes free and open access records of about 5000 terrestrial and marine species, representing a wide variety of organisms such as vascular plants, mammals, birds, bryophytes, arthropods, fungi. With this publication, the amount of data published by Portuguese institutions through the GBIF almost doubled, surpassing 5 million records.

The data now published come from the Azorean Biodiversity Portal and have been compiled through the enormous efforts of the team of researchers, coordinated by Paulo A.V. Borges, a professor at the University of the Azores and coordinator of the Azorean Biodiversity Group of the CE3C research center. The data were systematized in the ATLANTIS database, and is composed by spatial data of species presence. The information comes from more than 1,700 documents, including available literature (dating back to the 19th century), field work records and still includes, for some of the species, images of collectors' specimens or in nature.

The work was carried out between 2003 and 2015, as part of the INTERREG III B "Atlantic" (2003-2005), "BIONATURA" (2007-2008) and ATLANTISMAR - Mapping coastal and marine biodiversity projects in the Azores (Ref: M2.1.2 / I / 027/2011) (2012-2015). The project had as partners the Regional Directorate for the Environment and the Sea and the Regional Agency for Energy and Environment - ARENA. The leader of the project was the Ministry of Environment and Territorial Ordinance from the Government of the Canary Islands.

The decision to publish these data through GBIF aims not only to facilitate access in a standardized and integrated way with other publishers' registers through GBIF, to the global community, but also to facilitate their consultation and analysis through the Biodiversity Data Portal of Portugal, which GBIF Portugal implemented, following the ALA platform model. The publication becomes a milestone since it increases the amount of total records in the GBIF Portugal Portal by 90%, making the records total  more close to 6 million, and at the same time, represents data as more heterogeneous, from the perspective of biological diversity. In the near future, a regional portal dedicated to the Azores will be developed, within the framework of the PORBIOTA research infrastructure (AZORES2020).

These data publication event could be an incentive to further scientific studies, as GBIF can easily integrate information from any of the continents of the Atlantic. This publication is even more relevant when the creation of the AIR CENTER, an international infrastructure centered in the Azores, is under development. Likewise, access to information for nature conservation projects in the region can be facilitated, as well as support decision-making processes by the regional administration.

The archipelago of the Azores consists of nine isolated oceanic islands located in the middle of the North Atlantic, between the European and American continents, presenting a great diversity of terrestrial and marine organisms. The geographical scope makes these islands important living laboratories for the study of biodiversity, as shown by the studies of Arruda Furtado, who corresponded with Charles Darwin, having in the Azores several studies in Malacology that supported Darwin's theory of evolution.

To access the data set through GBIF: https://www.gbif.org/dataset/24baf0da-60a9-4a13-99d7-a8c860c3cb30
To visit the Azorean Biodiversity Portal: http://azoresbioportal.uac.pt/en/

About the University of the Azores

The University of the Azores is the only public university in the Autonomous Region of the Azores and was created with the objective of promoting sustainable development and higher education in the Azores. It has a campus in Ponta Delgada (island of S. Miguel), Angra do Heroísmo (island Terceira) and Horta (island of Faial). It comprehends 12 research units focused on scientific areas as diverse as biodiversity, volcanology, biotechnology, economics and history.

The Portuguese Node of the GBIF is placed at the Higher Institute of Agronomy,  University of Lisbon, and was created in 2013 through a protocol with the Foundation for Science and Technology to support national institutions in the provision of national biodiversity data and countries. Currently, more than 5 million biodiversity records are published by 20 Portuguese institutions. Learn more at http://www.gbif.pt.

The Global Biodiversity Information Facility is an international network and research infrastructure funded by governments around the world and aims to provide anyone, anywhere, with open access to data on all types of life on Earth. Learn more at https://www.gbif.org.